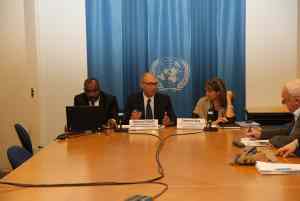 Geneva, 8 May 2013 – The Palestinian economy in East Jerusalem has been progressively isolated and constricted and now wields less than half of the economic influence that it had in 1993, a new UNCTAD report says. A disabling economic environment, high and rising rates of poverty, faltering industry and services, restricted investment, housing shortages, and inferior social and municipal services all combine to create hardship for the city’s Palestinian inhabitants and to stifle their economy’s potential, the report contends.

The East Jerusalem economy constituted 15 per cent of the Palestinian economy prior to the signing of the 1993 Oslo Accords, but has shrunk to an estimated 7 per cent in recent years. While the GDP of East Jerusalem (around US$600 million in 2010) has increased, albeit marginally, since 2001, its relative size has fallen because growth in East Jerusalem has lagged behind that of the remaining Occupied Palestinian Territory (OPT). It has been estimated that the Israeli separation barrier has imposed over $1 billion in direct losses to the economy of East Jerusalem since its construction began in 2003, the report says. Its adverse impact in terms of lost trade and employment opportunities endures, and is estimated at around $200 million per year, according to the study.

UNCTAD economists note that Jerusalem – of significance to people and faiths from around the world – has been gradually detached from the Palestinian economy, despite its historic role as the Palestinian people’s commercial, cultural and spiritual centre. The economy of East Jerusalem is not only constrained by Israeli impediments affecting the OPT generally. Many of the obstacles to the city’s development are specific to the status of East Jerusalem as an occupied territory subsequently unilaterally annexed to Israel, the report says.

UNCTAD notes that Palestinian poverty in Jerusalem has risen steadily over the last decade, as the city’s isolation from its Palestinian hinterland has continued to increase since the second intifada and the construction of the Israeli separation barrier. In the space of one year alone, the poverty rate of Palestinian households rose from 68 per cent (in 2009) to 77 per cent (in 2010). By comparison, only 25 per cent of Israeli households in (both East and West) Jerusalem were classified as poor in 2010. The available data indicate that 82 per cent of Palestinian children in East Jerusalem were living in poverty in 2010, compared to 45 per cent of Israeli children living in Jerusalem. 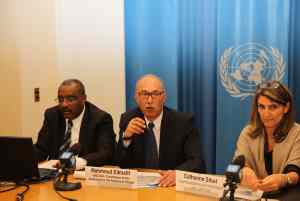 UNCTAD contends that the economy of East Jerusalem is integrated neither into the Palestinian economy nor into the Israeli economy. East Jerusalem’s economy is structurally dependent on the West Bank to sustain production, trade and employment, and at the same time is forcibly dependent on the Israeli market, to whose regulations it must conform, and which serves as a source of employment and trade and as the principal channel for tourism to the city. “These paradoxical relations have served to effectively leave the East Jerusalem economy to fend for itself in a developmental limbo, severed from Palestinian Authority jurisdiction and subordinated to the Jewish population imperatives and settlement strategies of Israeli municipal and State authorities,” UNCTAD asserts.

UNCTAD notes that the Israeli Government could go much further in meeting its obligations as an occupying power by acting with vigour to improve economic conditions in East Jerusalem and the well-being of its Palestinian residents, not to mention by ending settlement activities and the occupation of East Jerusalem in line with United Nations resolutions. In the meantime, steps forward could include removing restrictions on the movement of people and goods; reconsidering taxation patterns, services provision, investment laws, and building permits and procedures; and promoting equal access to health and education.

The report urges a number of steps to enable renewed growth, including investments by the Palestinian public and private sectors, as well as donors, to address the key socio-economic challenges in East Jerusalem of (a) improving social protection and development; (b) spurring economic progress; and (c) protecting human rights. In line with priorities identified by the Palestinian Authority for a total investment over three years in the range of $428 million, the proposed economic development programme targets three sectors: the economy ($77 million), tourism ($127 million) and housing ($124 million).

The report advises that such assistance should be coordinated closely with the private-sector and non-governmental social service providers in East Jerusalem, as the absence of the Palestinian Authority in East Jerusalem, and Israeli official neglect of what the report identifies as “dire socio-economic conditions” there, call for a creative and flexible approach.

UNCTAD also suggests devising alternative sources and sustainable mechanisms for financing investment, housing, and other productive activities. Such new approaches should aim at sustaining the economic, social and political cohesion of Palestinian Jerusalemites despite continued occupation, the report recommends. These should take their cue from grassroots experiences of Jerusalemites, who have “against all odds safeguarded the core of their economy, concentrated in the Old City, and resisted further encroachment on the limited resources, while adapting to harsh and difficult circumstances.” UNCTAD also calls for enhanced coordination and planning among international, semi-governmental and non-governmental bodies operating in East Jerusalem, with the aim of providing catalytic, targeted support to tourism, housing, and services.

East Jerusalem is the largest Palestinian population centre, with over 280,000 inhabitants living in the city and another 80,000 in the surrounding suburbs. The Israeli occupation began in 1967 with the redefinition of the municipal boundaries and the annexation of East Jerusalem. The report highlights a number of Israeli policies that have impeded the natural growth of the Palestinian population. For example, it is estimated that between 1967 and 1994, over 14,000 Palestinians lost their residency rights because they were physically absent from the occupied territory. Palestinian Jerusalemites’ legal status as mere “permanent residents” under Israeli law restricts their access to housing, employment, education, health services and representation in the city, the report says.

Other constricting forces are regulations permitting Palestinians only to build on a limited part of the land area of East Jerusalem, pervasive Israeli physical and demographic segregation strategies, and the recent construction of the separation barrier, which has severely impacted East Jerusalem by curtailing economic, civic and social interactions within the Palestinian communities divided by the barrier.

UNCTAD also notes that Palestinian Jerusalemites have to pay high municipal taxes in return for poor services and disproportionately low public expenditures on East Jerusalem. While Palestinians constitute a third of the municipal population, only three welfare offices operate in East Jerusalem, in contrast to the 18 in the western part of Jerusalem serving Israelis.