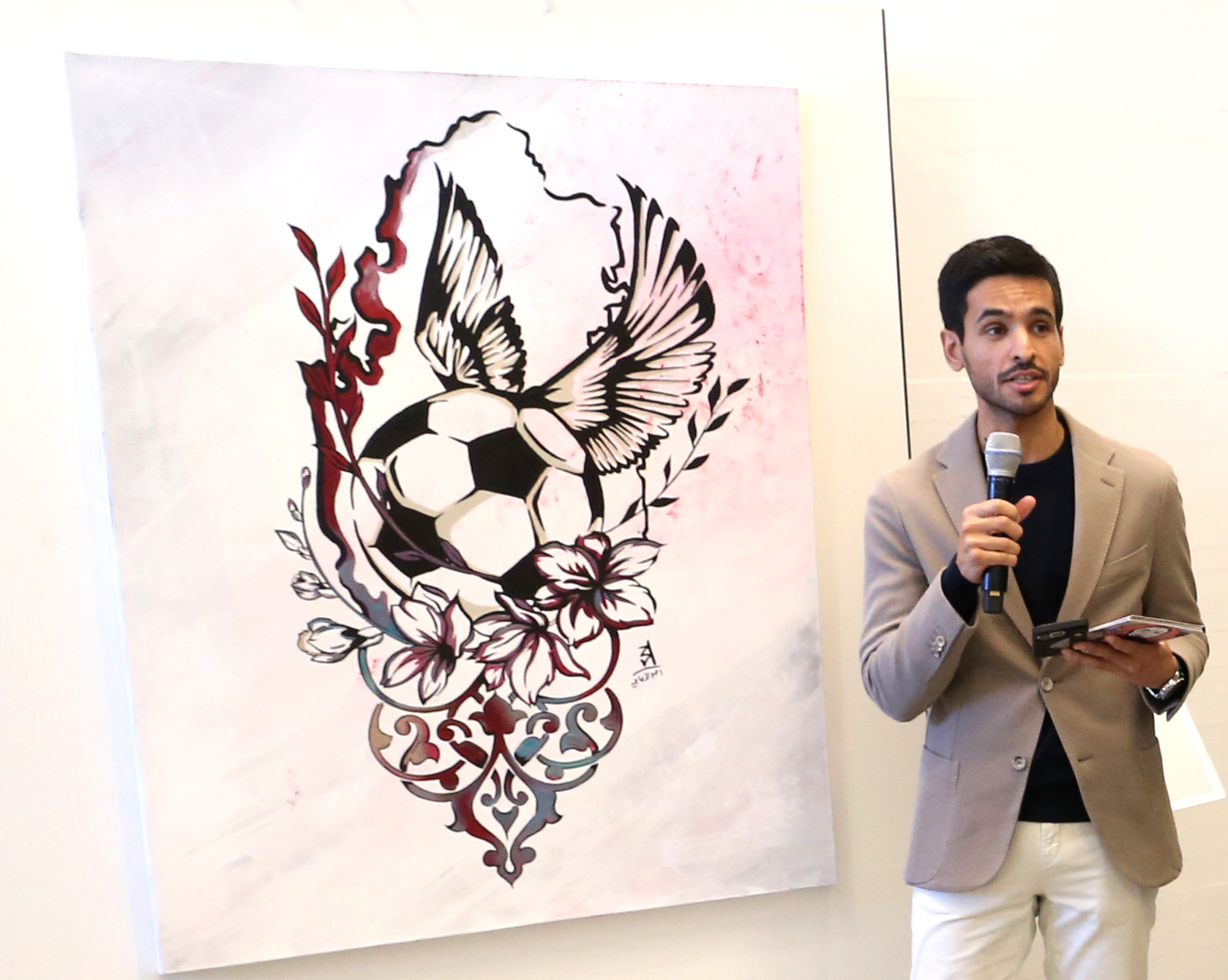 It is not often that we have a chance to meet artists from Qatar but it happened recently in the United Nations headquarters where he exhibited 10 of his most recent artworks dedicated to Football and Human Rights. At just 32 years old, Ahmed Al Maadheed has become one of Qatars’ most popular artists. Despite his busy schedule, he kindly agreed to answer our questions, so the floor is yours Ahmed Al Maadheed. 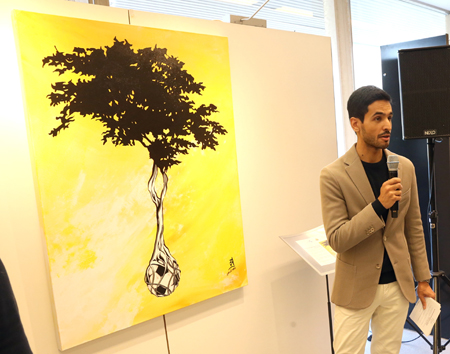 Q: Could you tell us a little about your art and how it all started?

My artistic career began at a young age. I remember I was drawing from the first time I held a pencil. I had dreams and ambitions when I was in school. In 2009, I started to turn my passion for art into a professional activity when I created my own company in the field of media, communication and art.

I have worked on various projects and achieved my ambitions through my creativity, such as the design of the official mascot for the Asian Cup Qatar 2011 and the Arab session in Qatar 201.

May 6, 2017, is an important date in my life and which boosted my career. This was the beginning of the crisis of the embargo of the Gulf countries on Qatar. For me the role of an artist is to express one’s feelings, and on that spectacular day I played my role as an artist by expressing my feelings and responding to the unjust siege of Qatar. I drew the famous painting (Tamim Al-Majd), which became the symbol of the unfair siege. The drawing quickly was widely spread on social networks, and people started using it to express their feelings. It became an expression of patriotism of a whole people who stood alongside the Emir of the State of Qatar, and you could find it everywhere – stickers on cars, buildings, clothes etc.

In my country they support art, they understand art, and the importance of the creative arts. If you deliver something good, and if you believe in yourself no matter what you are doing, you will get success.

Soon people got to know me as the painter of Tamim al-Majd. I later offered the original painting to His Highness, Sheikh Tamim bin Hamad Al Thani, Emir of the State of Qatar. Today the painting is exhibited in the National Museum of Qatar.

Q: Where does your inspiration come from?

My inspiration is life, man and the environment. I get inspired by anything beautiful, a passing conversation or different causes or looking at life in all its simplicity and beauty inspires you to be creative.

I have developed a habit of holding various exhibitions every year and expressing myself on different human-interest issues in my art work, which interests and inspires the public to attend my various art events.

What are your projects?

I have many projects that I aspire to achieve and there are different goals and ambitions centered around my creativity and my message to the world as an artist to express the creativity within me and serve humanity.

I’m a believer in the humanities, and I have had a lot of exhibitions about the humanities. Art for me speaks for itself, it is the international language. This is my style as you see it exhibited here. I like that my arts carry a message. So, for instance, if we speak about this painting ,it talks about love, peace and the culture of football. On the painting, you can see the feather of the peace dove, behind is the map of Qatar. I have developed a habit of holding various exhibitions every year and expressing myself on different human-interest issues in my art work, which interests and inspires the public to attend my various art events.

Q: Could you tell us how this exhibit come about?

In Qatar, there is a very active promotion of the cultural aspect of human rights. They believe that art can send a message as well, the culture of the whole universe. The world needs you as a human being, so through art I take a stand against racism and promote human rights.

The world needs love and compassion. It was then suggested that I should do this exhibit about human rights and football, so, I accepted the challenge, and the result is here. It was a great job. It is mixed-media acrylic and oil paint.

Q: How long time did it take to do this exhibit?

We have been working on it for quite a long time. I needed time to reflect upon on how to convert and translate the feelings and ideas. I wanted to make it simple and clear so that everybody could understand what it’s all about. ‏