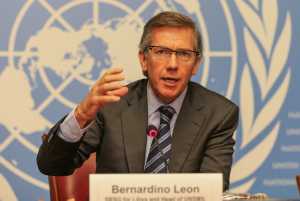 15 January 2015 - Participants in the Libyan dialogue hosted by the United Nations Support Mission in Libya (UNSMIL) concluded two days of intensive discussions at the Palais des Nations in Geneva aimed at finding ways to end their country’s political, security and institutional crisis. They expressed their unequivocal commitment to a united and democratic Libya governed by the rule of law and respect for human rights.

The talks were constructive and conducted in a positive atmosphere, and reflected the participants’ sincere commitment to reach common ground.

The participants agreed after extensive deliberation on an agenda that includes reaching a political agreement to form a consensual national unity government and the necessary security arrangements to end the fighting and secure the phased withdrawal of armed groups from all Libyan cities to allow the State to assert its authority over the country’s vital facilities.

The participants called on all the parties to cease hostilities to create a conducive environment for the dialogue. 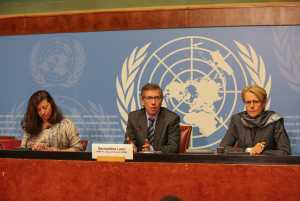 The participants also discussed confidence building measures to safeguard the national unity of the country and to alleviate the suffering of the Libyan population. These include:

· Address the situation of the illegally detained, and to work on the release of those detained without legal basis with respect to judicial procedures in this regard. · Address the situation of the abducted and missing and to work towards the immediate release of the abducted and provision of complete information on the missing to their families. · Address the situation of the refugees inside and outside the country and the internally displaced in particular those affected by the latest conflict. · Providing and allowing humanitarian aid to reach affected areas in coordination with international organizations and civil society institutions, including medical, educational, life sustaining and public services with special attention to the most affected regions and areas. · Stopping inciting media campaigns that provoke adversity. Political, religious and media messages should be directed to promote reconciliation, tolerance and national unity. · Opening of airports and securing air and maritime navigation as well as land transportation throughout the country and refraining from assaulting vital installations and working on opening the airspace especially with neighbouring countries. · Securing freedom of movement of citizens. · Calls to secure the salaries to all those who have a right to it without discrimination on any basis. · Invite relevant governmental institutions to secure and provide the appropriate mechanisms to import the necessary foodstuff and supplies. 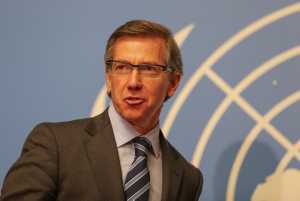 This dialogue is guided by a set of principles, the most important of which is commitment to the foundations of the 17 February revolution, respect for the legitimacy of State institutions, separation of powers and the peaceful transfer of power, as well as the rejection of violence and terrorism.

In addition to the political track, other tracks will convene next week and in the coming weeks and will include representatives of municipalities and armed groups, as well as political, social and tribal personalities.

The participants expressed concern at the growing threat posed by terrorist groups whether inside Libya or abroad, underscoring the need for concerted efforts to counter the threat of terrorism. In this context, they condemned the recent killing and abduction of Libyan citizens and foreign nationals, and expressed solidarity with victims of terrorism everywhere.

UNSMIL reiterates that dialogue is an ongoing process. As Special Representative of the Secretary-General and head of UNSMIL Bernardino Leon announced at the beginning of the dialogue, this is a process that will take time and the road ahead will be difficult. But the Mission believes time is of the essence and all sincere Libyans must quickly move towards finding solutions to the crises if they are to prevent further political, security and economic deterioration in their country.

UNSMIL expressed its commitment to providing the necessary support to the monitoring and ensuring the success of any agreement reached, as well as providing the necessary guarantees to that end. The Mission emphasizes that the dialogue is an inclusive and transparent process driven by Libya’s supreme national interest, including safeguarding the country’s national unity and protecting its resources and wealth.